“Sam, do you know automation will soon kill 51.8% of all jobs in India and we are already facing the worst employment numbers in a decade!” As coffee conversations go, I had one of the most interesting ones with a friend recently.

I took a sip of my freshly brewed cappuccino and had a serene look on my face as the caffeine hit my system. My calmness towards her rant obviously irritated her.

“What if I told you that I have been part of a large scale automation which didn’t kill jobs, rather saved them?” I asked with a smirk on my face.

I knew she was hooked now and I had all the time in the world to reel her in.

I took another sip and continued, “I am part of a high impact team of engineers at Neebal Technologies which is focused on helping fertilizer companies beat the heat from the current DBT scheme of our government.”

State of the Indian Fertilizer Industry

Before the current scheme came into effect, fertilizer companies were enjoying the subsidy payments from the government as soon as their goods reached the distributors. Now, they only get paid when the farmer buys it from the retailers and the sale is punched into a POS system.

Imagine, if your salary got credited after 3 months of your hardwork and that too if your boss was happy with your performance. Cash Flow Crisis!

Now imagine if you are running a multi-million dollar fertilizer company which gets paid only if the farmer buys it’s product. That is a huge shock to the system which was used to getting paid immediately. Thousands of employees’ salaries will be affected, and hence their jobs, if government subsidies don’t come in as they amount to on an average 70% of the turnover of any fertilizer company. That’s millions of dollars stuck for days, maybe months.

This is where, in a Bollywood flick, the director would ideally place a glittery entry for the hero. Enter Subsidex! Our very own Automation Bot.

At Neebal, we designed Subsidex to automatically read data from the DBT portal to monitor the digital movement of goods and provide various actions to ensure that subsidies are brought in faster from the government.

Digitization of the Indian Fertilizer Industry

“Wait, how will the government know whether I am a farmer and what and when I buy?” she asked with skepticism.

“Good, now you are asking the right questions,” I grinned. “There is a mechanism the government has put into action, starting with Aadhaar.”

To ensure that the government can digitally track the movement of goods from the company to the distributor, then to the retailer, and finally sold to the farmer, the government has created a database of registered distributors, retailers, and farmers using Aadhaar, KCC etc.

Each receiver of goods needs to acknowledge the receipt of goods digitally to build their stock for sales and all sales needs to happen via government approved POS machines. All this information of digital movement of goods gets updated on the NIC portal.

What Subsidex does and how it helps

Subsidex downloads all this information and sends alerts/notifications to all the stakeholders to ensure that while we adhere to the process as directed by the government authorities, there are no delays in moving the goods digitally.

For instance, for a large fertilizer company (with revenue of over $ 1.1 billion every year), we deployed Subsidex to achieve 2 simple goals: 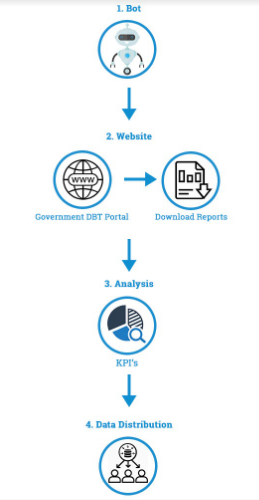 Subsidex has been able to bring down their delay in acknowledgement from an average of 50 days to down to as low as 1 day and in worst-case scenarios, it still saves over 15 days compared to the current scenario.

The company’s monthly subsidy is about $100 million and with Subsidex,

Our insights into movement of goods, subsidy prediction, top retailers, top distributors, and market share and exposure have helped the company to strategize and improve their cash flows to sustain hundreds of jobs and envision growth.

“Wow, that additional $1 million per month should be ample to pay the salaries of their employees,” she mumbled to herself, loud enough for me to hear.

“Exactly, automation, if used wisely, can lead to a much more efficient organization. Fear of losing mundane jobs which automation will kill should ideally lead to upskilling of the current workforce into doing what we humans do best; Think, Do, Learn, Improve and Repeat.”

This blog post is a series that Saumil, Neebal’s Client Engagement Manager will be writing that will showcase the impact Neebal has created for their customers by adhering to their ethos of ‘Be the Doctor’. Saumil loves advocating and practicing ‘consultative sales’ and believes in empathizing towards the customer as the best way to find a solution for them. Reach out to Saumil at saumil.shah@neebal.com.